September 2016 was a very significant month for me. Not only was I asked to present at the Nikon Event in Melbourne, but I was still on a high from presenting at the Baby Summit on the Gold Coast, the month prior.

And then something wonderful happened. Something very unexpected… This is the story of how I went from first picking up a camera, to one of the proudest moments of my professional life.

When I started photography back in 2004, there were no forums, workshops or mentor options.  There was nothing.

It was a scary big world out there and it wasn’t common to make a decent living with the art of photography.

In high school I told my teachers I wanted to be a photographer and they just patted me and said ‘go you’. I don’t think they believed me, and my friends would say ‘that’s not a real job!’.

My learning was much slower than it would be for someone nowadays. I see photographers moving forwards in leaps and bounds compared to my snail pace back then!

I do think however it is a direct reflection of the market we live in today, the community of the photography industry as a whole, and the almost ‘too eagerness to share’ attitude.

We are all such an awesome friendly bunch, I wonder if plumbers or accountants from different firms and businesses all get together and share ideas, tips and tricks?

They aren’t as lucky as us, though, I just know it.

We have so many industry heavyweights willing to share their knowledge, with oodles of YouTube we can watch, online mentoring programs & webinars to join, business tips we can use… and in so many different genres of the photography industry too! It’s a smorgasbord of education, an information overload!

So now here I am, in my 14th year of business. I still remember starting off with a humble Canon 35mm, counting my rolls of film out of the fridge prior to a session or wedding.

I didn’t set out to photograph newborns though, and to be honest, they scared me a little. But the more the wedding photography business grew, the more my clients came back with fresh new little additions, eager for me to photograph them.

I was thrown into the deep end in the late 2000’s and slowly I began to love photographing newborns. I loved their innocence, how tiny they were and how they will never ever be that small ever again. And damn they smell good!

And as my wedding business grew, so did the newborn business. It was almost a parallel growth, it helped that I gave all my wedding clients a complimentary newborn voucher with NO EXPIRY DATE!

So without even realising it, I was photographing just as many newborns as weddings and portraits, it seemed like an easy transition.

It was effortless and felt right, as my business grew so did the growth of the industry, facebook and online sharing and workshops. I was so very blessed to finally have a platform that I could use to help increase my skill level.

I was lucky enough to snag a spot in one of Erin Hoskins (from Erin Elizabeth Photography) workshops in early 2013 and then hosted her at my little studio again later that year.

It was so amazing listening and learning from her.  I love her to bits and she’s become a good friend now over the years, she is, however, a total freak of nature!  Her work with newborns truly sets her apart and her attitude is even better.

Last year I entered the AIPP State awards, as I have for many years, entering 4 images into weddings, 4 into family and 3 into newborn.

I wasn’t overly thinking it and didn’t consider what I was potentially doing by only entering 3 into the newborn category. I did have a 4th image, but at the 11th hour, thought it was better suited to the family category so moved it over.

My newborn images did very well… extremely well actually!  I scored a Silver, Silver Distinction and a Gold Distinction!  I was gobsmacked. I knew my naughts and crosses photo was my strongest image, but definitely didn’t expect a GD for it!

So amongst all the ‘hype,’ there were whispers of me taking out the State Newborn award, tt was exciting, but then I remembered: “umm, guys I only entered 3 in newborn!”.

So that year, the first year for Newborn in State, there was no actual ‘winner’ of the category in NSW, but that’s OK, I took those 3 images, added another image to the collection, and BAMM… I won Australian Newborn Photographer of the Year!

How’s them apples? I couldn’t believe it, totally speechless, I was without words!

(Well, I had enough words during my acceptance speech when I said: “I’d like to spank the sponsor of this category.” Yup, I did that, and I’ll never live it down. Ever.)

The weeks that followed were a little bit of a media blur, I had not only the papers calling me, but also the Today Show.

So on the 22nd September 2016, I sat down with David Campbell and Sonia Kruger live on national TV for a little chat about my work and the awards. I was a bucket load of nerves but enjoyed every second of it as well.

This is the award winning work of Natalie Howe! Adorable! #9Today https://t.co/Npc5dhtm8R

And here are the 4 images that helped me take out the title of Australian Newborn Photographer of the Year 2016. You can read the stories of why they were important to me, and why I chose them, below. 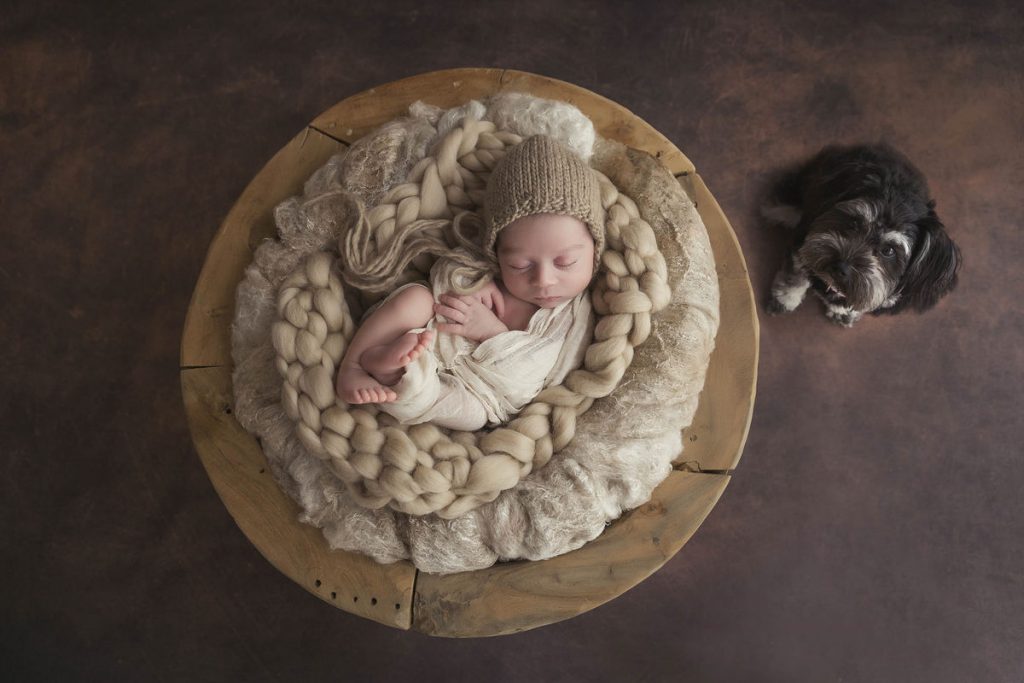 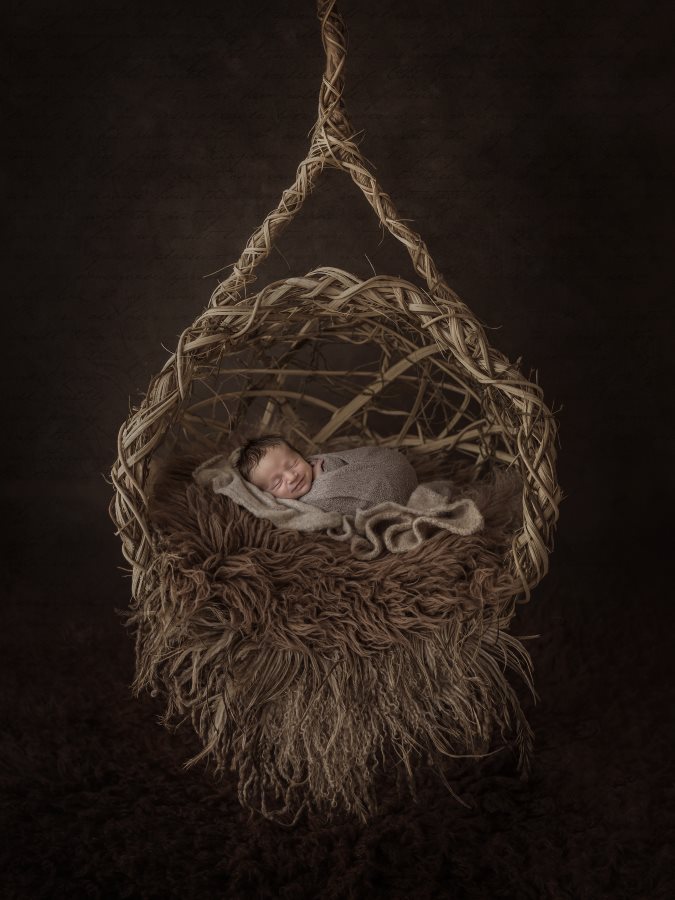 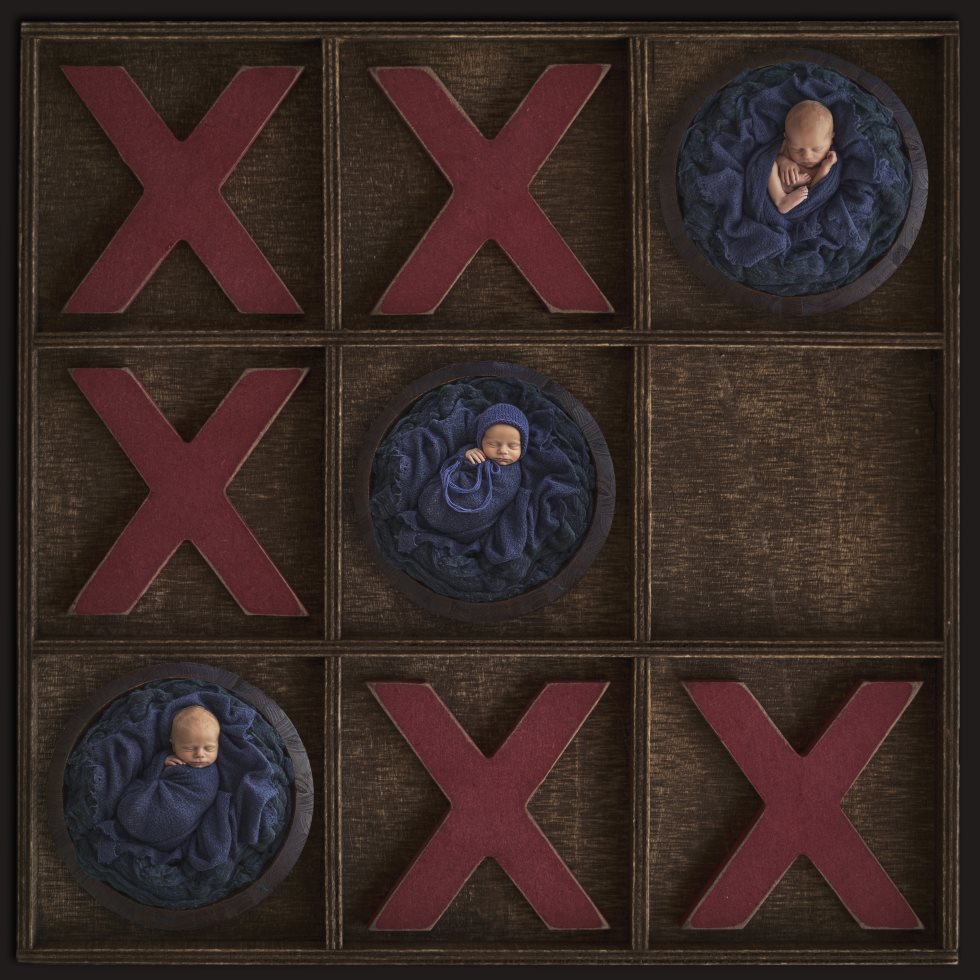 Every family starts off with a puppy, it’s your first baby realistically before you graduate to a human one. Baby Macey was Rob and Mel’s first ‘baby’ after their marriage.

I also had the honour of capturing their beautiful wedding, so when they called to say they were expecting, it was a natural progression for me to capture another milestone. With baby Macey being the apple of Mel’s eye, that soon was going to change as a human baby took over all the attention.

I wanted to show this through imagery, placing Isaac in the centre, the centre of attention, while Macy although still very much loved by her human parents, was no longer the centre of their universe, was placed, just outside.

Little Caleb was booked in like every other newborn, just a standard session, however, when mum turned up, she brought the little Gryffindor hat with her and I knew I had to quickly come up with something suitable.

They had had a hard time in the past year, with her mum passing away from brain surgery complications. Something that is close to home for me, considering I suffer from the same condition her mother died from. I wanted to make them smile and exceed their expectations, considering my son and I are both massive Harry Potter fans, I had the props necessary to take the image to the next level!

I had taken the image approximately 6 months prior and I knew I loved it. I saved it in my ‘potentials’ folder and when I realised it suited the look and theme of my portfolio I gave it the thumbs up.

There was no real hidden meaning behind this image. It makes me smile, and when an image makes you smile it has to be shared.

This image is my proudest newborn image to date. There are so many meanings that can be taken from it, and I have found that those that look at it, take away something different. It seems to affect people differently. For me, it represented a particular client of mine.

This picture isn’t of her baby, but on the day of this session, I received the devastating news that she had lost her 5th child. It affected me quite profoundly, but I had a newborn session I was setting up for so had to get ‘into the mood’.

When my client arrived, I asked her if I could shoot a concept after her session and explained what had happened. She was more than happy to oblige. This image is to pay homage to all those who have ever struggled to conceive, whether it be their first or their 5th.

Sometimes one of the most natural things to do as a woman doesn’t come so naturally to some and this image represents those struggles.

Who can say? I do know it won’t be long now until I hand over the baton to another well deserved Newborn Photographer for this year’s awards, though.

All I can say to the next recipient is enjoy it, drink that champagne and celebrate! 🙂